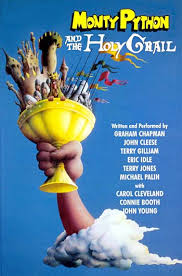 “Your mother was a hamster and your father smelled of elderberries.”

Those lines, and a whole host more, are why ‘Monty Pyth

on and the Holy Grail’ is my all time favourite comedy film. From those lines I can picture entire scenes and at a bit of a push quote large sections of the film. No film makes me laugh as much or as often as ‘The Holy Grail’ still does, despite more viewings than I can remember.

The work of Cleese, Palin, Chapman, Gilliam, Idle and Jones has provided us with some of the greatest British comedy in history and most people will have a favourite scene or sketch from either one of their films or their TV shows, from the genius of the Inquisition sketch to the slapstick comedy of the Ministry of Silly Walks, via the final scene of ‘Life of Brian’ with its distinctive whistled tune.

They’re comic gold throughout but for me the 91 minutes of the ‘Holy Grail’ was the pinnacle of their work; it’s rare for more than a minute or two to pass before the next perfect joke hits home, and some of the arguments between characters are so ludicrously bizarre that you wonder what kind of state you have to be in to come up with them (the two rabbit related scenes are prime examples of that).

For a comedy that’s now 26 years old it has an incredibly timeless quality, perhaps because it focuses on one of the nation’s favourite myths; that of King Arthur and the knights of the round table. In the film they’re sent on a mission by a rather fed up god to find the Holy Grail but in the process end up arguing repeatedly with a set of preposterous French knights, devoting more time than any other comedy film I can think of too discussing the flight capabilities of swallows and engaging in several incredibly ill-judged battles. 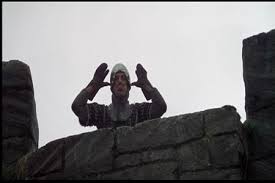 One battle which does go a little more to plan offers arguably the funniest individual scene in the film, the fight with the Black Knight. An invincible soldier he is utterly fearless and incredibly stubborn; so stubborn in fact that he refuses to back down even after receiving a total limb-ectomy from the King.

A killer bunny rabbit, farcical witch hunts, plague humour, an insane Scotsman and several indignant peasants all come together to make sure that the pursuit of the holy grail itself remains merely a framing device, one you almost hope won’t be found so that the story can continue.

However like with all the best comedies, the Python boys knew when to stop and so leave you wanting more by drawing the film to a close after only an hour and a half.

It’s hard to imagine a film topping ‘The Holy Grail’ for me, a fact made clear to me by the films I turned down when considering my favourite; Shaun of the Dead, The Hangover, Life of Brian, Four Lions, Anchorman, Airplane and the list could go on.

Until then Monty Python’s effort will remain my favourite comedy film due to, in my opinion the most crucial grounds, that no film has ever made me laugh so hard.

Today's song is my favourite example of where music and comedy combine, which seems appropriate considering the rest of the blog. I'd advise you watch their TV show, it's one of the funnier sitcoms in recent years.