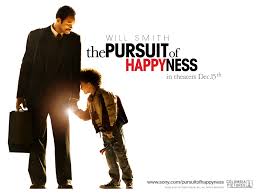 Deciding what was my favourite drama ended up being tough for two reasons. For one because a large majority of films if not all could be considered dramas in one form or another and so it became as much about the other genre categories I decided on to work out what films fell within the purely drama genre, but there’s no hard and fast rule when it comes to genre classifications. Secondly even once I’d tried to rule out the comedy-dramas, historical dramas, crime-dramas and whatever else-dramas, I was still left with a pretty daunting amount of options among the films I love.

However in the end I settled on this 2006 effort from director Gabrielle Muccino, who would later direct ‘Seven Pounds’, another Will Smith starrer and a film which seemed to be pursuing the tear jerker label with an almost obsessive passion, but that’s another blog post for another time.

‘The Pursuit of Happyness’, as well as including one of the most annoying but intentional spelling mistakes of any film title, is a perfect lesson in how heart warming and heartfelt drama should be done. The tale of Chris Gardner (Will Smith), a man of fierce intelligence but limited opportunities whose inability to sell an almost obsolete and over priced piece of medical equipment ends up driving his wife (Thandie Newton) away and leaving him and his son (played by Will Smith’s own son Jaden with a level of cuteness that is bordering on cheating) homeless. The second half of the film shows Gardner’s attempts to get a lucrative place at an investment bank while looking after his son.

As you might guess from the title it’s a film all about the “American Dream”, about aspirations above your perceived station and the power of hard work. On the most basic level it’s a fairly simple tale of someone getting success through hard work, determination and dreaming big and portrays the poverty Gardner endures as the product of bad decisions and bad luck.

It’s a truly American story of aspiration and isn’t particularly ground breaking or challenging of certain assumptions about poverty. However what makes this film work is the performances of the two Smiths. I’m a big fan of Will Smith and this film more than any other showcases that he can cut it as a serious actor rather than simply being the man who punched an alien in ‘Independence Day’.

He plays Gardner with such honest, open intensity and likeability that you’d have to have a pretty cold heart to not be rooting for him before the film’s even halfway through. The relationship with his son is so heartfelt and, unsurprisingly given the real life father and son relationship, natural that it lends all the scenes between them not just emotional gravitas but realism. 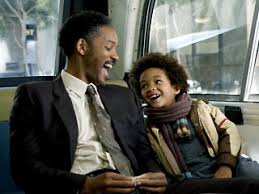 It’s a film which could so easily be corny yet is made powerful by those two central performances and I challenge anyone to watch a scene about two thirds of the way through in a subway bathroom without feeling the most intense urge to help them in some way.

‘The Pursuit of Happyness’ is one of those very rare films which is incredibly feel good without ever seeming to stray too close to feel sick and it deserves huge respect for that.

Honourable Mentions: Probably the closest competitor in this category was ‘Slumdog Millionaire’ and it really was an almost impossible choice; I love ‘Slumdog’ and in the end it was only because of that bathroom scene in ‘Happyness’ that it wasn’t the one I wrote this blog about. ‘A Single Man’ and ‘Up in the Air’ were both not too far away either.

Next up in the film posts, sometime this week, will be my favourite offering from the 'Action' genre.

Today's song i've posted before but some things are just so good that they deserve an awful lot of repeat listenings. It came on my iPod just as i was finishing this post and i couldn't resist sharing it with whoever reads this.

Email ThisBlogThis!Share to TwitterShare to FacebookShare to Pinterest
Labels: Drama, Film, Pursuit of Happyness, Will Smith