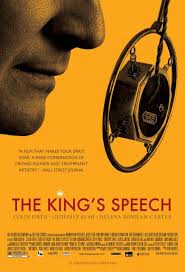 Having arrived a little late at the ‘King’s Speech’ party I have to admit I was a little underwhelmed; it’s a very good movie, but as with anything that receives the level of praise or hype that it did, it was always likely to disappoint a little when viewed through that skewed perspective. You spend several months being told a film is one of the great British films of all time, a triumph of cinema and the rightful champion of every awards show imaginable, and then you sit down to watch 2 hours of film which are simply never going to match up to the level of expectation created. I felt that way straight after the first time i saw it, a few weeks ago, and i was left with the same feeling this evening when i watched it again.

That’s what happened here and I say this as much out of frustration that I didn’t see it at the cinema before the praise reached saturation point (around the build up to the Oscars) as it any criticism of the film itself. It is a really enjoyable and uplifting film, with two brilliant central performances and some great directing by Tom Hooper, I just wish I could have seen it at a point when it would have been more possible to make my own judgement of the film rather than compare it to the hype.

Colin Firth is rightfully considered a national institution; he’s a brilliant actor who embodies a lot of the stereotypes of being British, that British people are actually quite proud of, rather than the ones we’d rather didn’t exist.

I have been trying to think of another actor who could have done his roles in ‘The King’s Speech’ and ‘A Single Man’ as well as him and I’m coming up blank and that surely is the mark of a great actor, when two wildly different roles both seem to have been made for him. He has a special skill for showing proud men with vulnerability and some fairly serious emotional traumas in their life and though for me he never quite reaches the heights of that phone call in ‘A Single Man’, his performance here is top draw, full of all the complexity, subtlety, humour and charm we’ve come to expect from one of the finest British actors around.

His performance is perhaps topped though by Geoffrey Rush as the Australian speech therapist who helps Firth overcome his stammer and address the nation just when it needed its leader most. In fact it seems almost unfair to try and judge one actor against the other when what makes the film work is the way the two interact with each other, the relationship that develops between them seeming so believable and natural in both its high points and its low ones that to judge them individually seems to miss the point.

It would also be unfair to ignore the work Helena Bonham Carter does in one of the most reserved roles I can remember seeing her in; she proves that she can do prim and proper just as well as she can play the slightly unhinged characters she has made her own over her career.

It is not a perfect film, nor necessarily the uncontested Best Picture of the 2011 Oscar nominees; ‘The Fighter’ and ‘The Social Network’ I would argue are both at least as good in their own way, and I’m yet to see ‘Black Swan’ or ‘True Grit’ but I’m led to believe that any other year they’d have stood a deserved chance of winning the statue themselves.

However it is enjoyable, even on repeat viewings, and includes some great central performances, so I’d advise anyone to watch it, just try your hardest to forget about the hype and experience it as what it really is, a damn good and wonderfully British two hours of entertainment.

This is a song from another artist who did an excellent set at Glastonbury (A good half hour of which is available on the BBC site and well worth checking out).