Favourite Sports Film - The Fighter (Russell, 2011)
This was probably the easiest genre to decide on a favourite, as the history of sports movies is not exactly over flowing with high quality films. There are plenty of good ones, for example ‘Cool Runnings’ did tempt me, because who doesn’t love that tale of a Jamaican bob-sleigh team, the ‘Rocky’ films have some great moments and rags to riches football story ‘Goal’ is a definite guilty pleasure, but in the end there were only two films which immediately sprang out at me as truly great sports films; ‘The Fighter’ and ‘Raging Bull’.

Now ‘Raging Bull’ is rightly regarded as one of the great movies of all time from any genre with Scorsese and De Niro coming together to fantastic effect. However these blogs are about my favourite films rather than necessarily the critically best ones and the simple reason why I chose ‘The Fighter’ over the 1980 classic is that I enjoyed it more.

The films share a lot in common; both are biographical stories of boxers who have as many problems outside the ring as in it, both look at the impact of family and friends on sportsmen, ask questions about the potential costs and rewards of pride and are packed with excellent performances both from the lead and supporting actors.

‘The Fighter’ is the story of Micky Ward (Wahlberg), a boxer from Massachusetts and his efforts to make it as a professional while dealing with the minefield of help and hindrance that is his family. I think one of the reasons why I prefer this film to Scorsese’s classic is that the central character is actually likeable. The brilliance of ‘Raging Bull’ is undoubtedly reliant on De Niro’s LaMotta, a man so full of rage, paranoia and pride that he hurts everyone around him, he isn’t supposed to be likeable and that’s fine, but in ‘The Fighter’ Wahlberg’s character has plenty of flaws but is shown to be an honest, caring and determined man who is defined by, for better or worse, his relationship with his mother, brother and girlfriend.

Christian Bale is simply phenomenal as Dick ‘Dicky’ Eklund, Micky’s elder half-brother, a former boxer who is now addicted to crack cocaine; full of stories about his prime, half-cooked schemes and aggression. As he did for ‘The Machinist’, he lost a lot of weight for the role, giving Dicky the necessary wiry, drug addled appearance and throughout he manages to make the character incredibly watchable, always moving and talking, the worst influence on Micky’s life and yet also his most passionate supporter and inspiration.

Like Dicky, Melissa Leo’s mum Alice is a terrible influence on Micky, yet you never doubt her genuine desire to see him do well, it’s just that her methods are all wrong. She’s fiercely defensive of her sons and doesn’t take well to Micky falling for a college dropout turned bartender, Charlene, played by Amy Adams. The scenes between the two of them are just as entertaining as those between the brothers and it is the tension between them which carries a number of crucial scenes as well as injecting some comic relief. 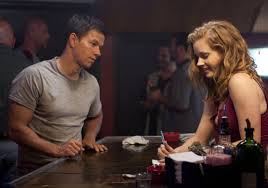 All three deserved their Oscar nominations and I’d agree that Bale and Leo deserved the wins, but it is the comparatively subtle performance from Wahlberg that keeps the film grounded and believable, as a man pulled in three different directions by the people he loves. He’s an excellent foil to the drama of Dicky and Alice and gives the film it’s heart; a scene where he takes Charlene to a film he knows he’ll hate in an effort to impress her is incredibly charming as it shows a man who wants to be more than just a fighter.

As with all the best sports movies, the actual sport takes a back seat for long periods to the trials faced by the athlete in their personal lives, but the fight scenes are brutally intense and there is the obligatory training montage for anyone worrying there wasn’t quite enough pugilism for a supposed boxing film.

It will be interesting to see whether, over time ‘The Fighter’ begins to be mentioned in the same breath as ‘Raging Bull’, because I believe it deserves to be. The cinematography and direction doesn’t top the iconic look of ‘Bull’ but the 4 central performances mean that ‘The Fighter’ is by quite a way, my favourite sports movie of all time.

I chose this song for today purely because i was trying to think of a song with boxing connotations that wasn't 'Eye of the Tiger' and i remembered the video to this.