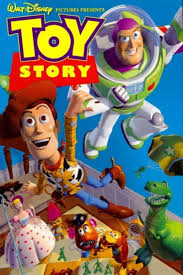 Deciding on my favourite animated film at times felt like I was simply trying to decide on my favourite Disney/Pixar film; there are notable exceptions, primarily ‘Shrek’ and ‘Despicable Me’, but it’s a genre that is dominated by their efforts.

In the end I went with the film that sparked the Pixar domination, ‘Toy Story’ as my favourite film but it could very easily have been either of the ‘Toy Story’ sequels, ‘Monsters Inc’, ‘Wall-E’ or ‘Up’. I chose it both because it sums up what Pixar are all about and because even more than a decade and a dozen or so films, it stands up to their current work.

Woody, Buzz, Mr Potato Head, Slinky and all the other toys are iconic figures from my childhood, as distinctive as anyone and inspiring just as much affection. Woody and Buzz especially are perfect characters, carrying a degree of human emotion and depth that belies the fact that they’re merely a collection of pixels. 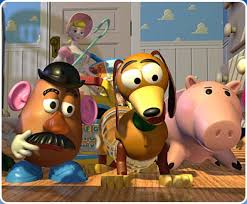 What made all three ‘Toy Story’ films so powerful, and to a large extent any of the Pixar movies, is that the problems they face carry a lot of emotional resonance for their audience; abandonment, fear of outsiders, belonging, friendship, love, hope, growing up and moving on, they’re emotions everyone in the audience will have felt and ‘Toy Story 1’ set the tone for what was to come by encapsulating the majority of those emotions in a hugely entertaining adventure story.

‘Toy Story’ deserves respect for being the perfect example of how to make a film aimed primarily at children. Entertain them but don’t patronise them, give them real, relatable characters in extravagant circumstances and offer them the opportunity to see grown up problems in child friendly settings. The beauty of that approach is that it also guarantees your adult audience; parents won’t just enjoy taking their children to the films, they’ll buy them on DVD with the intention of watching them regardless of the child’s interest.

I grew up watching the old Disney films on video tapes, I reckon I had most of them main ones and my favourites were ‘The Lion King’ and ‘Jungle Book’ but with the vast improvements in CGI and the ridiculous production budgets available for a high profile children’s film I think hand-drawn animation had run its course. When Pixar emerged onto the scene they brought a fresh way of making films combined with the traditional Disney storytelling values, so it made sense beyond purely business reasons for Disney to buy Pixar and bring together the two greatest schools of animated film production.

I love the film because it is quite simply a great film, regardless of its genre or target audience. However the reason I chose it over such incredible other efforts as mentioned above, is that it heralded the arrival of a new generation of excellent children’s films, the animation was massively ahead of anything else out there at the time and most of all because it made me laugh when I was 10 and still does a decade later.

Today's song could only really be one thing.