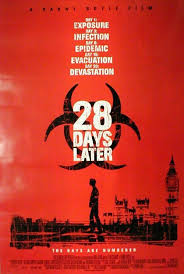 I have never really considered myself a fan of horror films, it’s not a genre that I tend to seek out, but when faced with deciding what film would be my favourite from the genre I realised there were actually more contenders than I would previously have believed. To say it is one of my less favoured film forms it actually presented me with quite a challenge, whether to go for one of my favourite slasher movies, such as perhaps the original ‘Scream’, one of the ‘of the Dead’ series (either the original Romero ones or the 2004 Snyder effort), the simple but effective scares of ‘Paranormal Activity’ or the intensely claustrophobic fear of ‘The Descent’.

However despite realising my affection for all those films and a whole host of others I in the end realised that there could be only one film crowned as my favourite horror film; ‘28 Days Later’. Danny Boyle’s 2002 effort is the film that scared me in the most deep and lasting way, which in the end has to be the aim of any horror film.

Crucial to that is undoubtedly the UK setting; shots of London abandoned and the motorways empty will always strike more fear into my heart than any portrayal of an American city in a similar state ever could; I have walked those streets and driven down those roads, the scenery and location is familiar and so to see it destroyed carries more weight.

’28 Days Later’ is not strictly speaking a zombie film, the threat are humans infected with a ‘rage’ virus which fills them with adrenaline to the extent that they become mindless killing machines, acting like zombies to an extent, but they are not reanimated corpses and so therefore can’t be considered true zombies. However I often consider it to be so because the narrative elements are the same as in zombie films; cities abandoned, small strongholds of survivors, crazed flesh-eating monsters and unlikely people thrust into being heroes.

It’s one of the trends of the modern zombie film, that the creatures are no longer the shambling cripples of the Romero originals, they run now, often as fast or faster than the surviving humans can hope to get away. The infected act without thought beyond the primal urges to feed and to fight and so they make for a terrifying threat to the hero; they are brutal and animalistic, yet undoubtedly still human. A human threat, no matter how inhumane they may act, will always be scarier than some fictional demon or creature because they raise questions, whether consciously or not, of the limits of human cruelty and barbarism.

So a human threat in a familiar location makes for a good horror film in concept but it requires the execution to live up to the idea. Luckily though ‘28 Days Later’ is a film executed with near perfection by Danny Boyle. The look of the film is superb with the opening scenes in London of bicycle courier Jim, played by Cillian Murphy, brilliantly realised; there’s a chilling quality to seeing the streets of London silent, to seeing one of the iconic red, double-decker busses on its side and to seeing walls covered in missing persons posters. 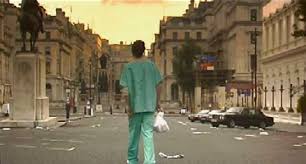 There’s several stand out moments, from a church wall daubed with the most perfect graffiti “Repent, the end is extremely fucking nigh”, to the final showdown set to John Murphy’s incredible score, via an almost unbearably tense scene in a dark tunnel with silhouettes of the infected drawing ever closer, preceded by a tide of rats.

The entire film is an example of where plot, script, cinematography and soundtrack all came together to create an almost faultless piece of cinematic entertainment.

No review of a horror film can be complete without considering the impact it had on me; I can’t remember ever feeling such a deep and intense discomfort after watching a film as this, it unnerved me completely and I remember struggling to sleep the night I first watched it, aged 13 or 14, almost convinced that I would wake up the next morning to find that the world of the film had become the real world. Lying there trying to get to sleep every noise from the street outside was, to my freaked out mind, obviously an infected that was going to try and break into my house and kill me. That has to be the mark of a good horror film; if you are left fearing being killed in your sleep then the film has done its job.

The song today is one i've posted before, in a blog about my love of zombie films actually, but as well as being the soundtrack to one of my favourite sections of '28 Days Later' it is also just a damn good piece of music.